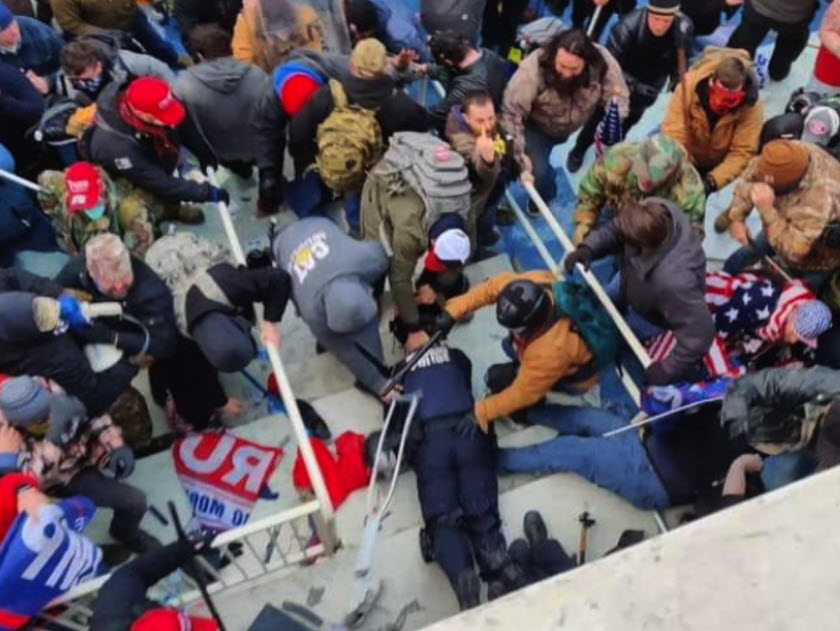 (PHOTO: Jeffrey Sabol, in brown jacket with a baton over the police officer. Credit: Twitter)

A suspect in the U.S. Capitol riot has surrendered to the FBI in Rye. “Earlier this morning, we took Jeffrey Sabol into custody for his role in the riot and assault on the Capitol building,” said Assistant Director in Charge William F. Sweeney, Jr. on Friday morning after Sabol turned himself in.

(Updated) On Saturday evening, a FBI spokesperson told MyRye.com Sabol was taken into custody on Friday morning at the Westchester Medical Center in Valhalla, and that his complaint was filed by the US Attorney’s Office in Washington, DC. The arrest would have been covered by FBI agents from the Rye field office.

“Jeffrey Sabol turned himself in to FBI in Rye, New York, NBC 4 New York has learned. He is charged with obstruction of a law enforcement officer or federal function.

According to the federal prosecutor, Sabol was seen on video allegedly pulling an officer down the stairs, while allowing another man to hit the officer with a flag. Additionally, he may have assaulted another officer in an attempt to get their baton.

Sabol allegedly tried to flee the country to Switzerland, according to the federal prosecutor. He also allegedly attempted suicide following the Jan. 6 event, which the federal government notes is a sign of possible guilt. Sabol, a geophysicist who worked diffusing ordinances for military, was hospitalized, before being admitted into a psychiatric center.

Due to Sabol allegedly being a flight risk and danger, a judge ordered him held.

Attorney information for Sabol was not immediately known.” See the story.

The city council’s agenda for its meeting at 6:30pm on Wednesday, August 10, 2022 is out. The meeting will be held via zoom video-conferencing with no...
Read more
Police & Fire