I wanted to extend a special thank you to you and the staff at MyRye.com. I was not aware of your existence until you published up my brother’s obituary back in January. Since that time, I have become an avid reader.

I grew up in Rye in the 50’s and 60’s. More specifically, I grew up in Indian Village in a wonderful red brick house at 3 Oneida Street. Of all the places that I have lived, I always think back to the wonder years in Rye. Indian Village was a magical place during the summer where all the kids would get together and play hid and go seek on bicycles at night. One group would hid and the other group would seek. This would go on for hours every night.

Then, if we could talk our parents into it, there was an evening at Playland. I remember the first McDonalds in the area was in Mamaroneck. That was probably some time around 1967. My friends and I would twist my older brother’s arm to take us in the car. Hamburgers were 25 cents, french fries were 20 cents and a milkshake was 30 cents. Those were wonderful days.

I remember when they were building Interstate 95 that ran parallel to the rail road tracks. They drilled and blasted rock formations for two years to clear a path. The explosions because common place during the day. At that time, the only parking for the train station was at the station and not in the lot that butts up to Rye Brook on the corner of Highland Rd. and Purchase St. That lot was just a field. 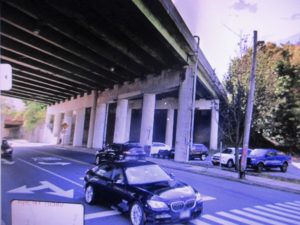 That brings me up to a bit of trivia. I have attached a picture of the 95 overpass over Purchase St. Where the white cement support columns are now standing was once a gas station. Anyone know what gas station was there? A short distance up Purchase St. was Lepler Brothers store. They had the largest assortment of toys in Rye. I spend so much time in there just wishing I had money.

I can still go up and down all the streets in Indian Village in my mind and tell you who lived in each house. Those truly were the wonder years. I have always said that Rye in not only a place, it is a state of mind. Thank you for the memories and for keeping Rye alive.

LETTER: Twice As Much Voting

In a letter to MyRye.com, Forest Avenue resident and licensed psychologist Sasha Blackwell talks about the mental health crisis impacting our kids and how...
Read more