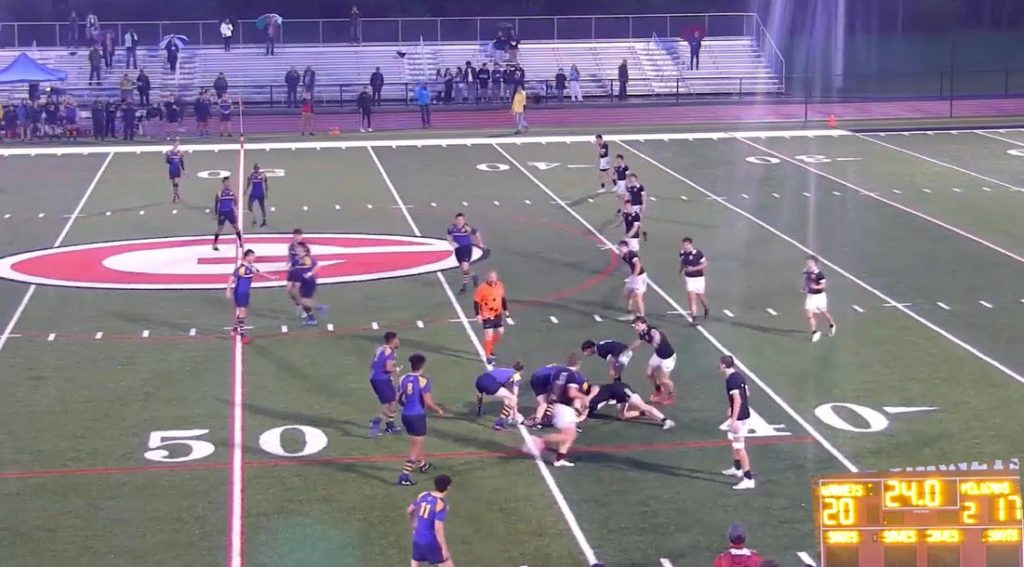 Rye Boys Varsity Rugby Shooed the Pelham Pelicans on Friday at home, flying away with the win 20-17, and entered the U.S.A. top 50 ranking for the first time.

“Sophomore Sjef Smits caught the opening kickoff and ran 60 yards to score the try all on his own,” said Rye Boys Varsity Rugby Coach James O’Hara. “Sjef wowed the crowd and his teammates as he outpaced everyone on the field to give the Garnets an early lead in this important league battle.”

Rye won an important match over the Pelham Rugby Club in front of an impressive crowd despite the wet weather. The Garnets win is even more impressive considering that they played a man down for virtually the entire length of the match. Rye was given a red card on a questionable high tackle call early in the game, which meant they had to play 14 vs. 15 for the rest of the game.

Tries were scored by sophomore Sjef Smits and Senior Bernie Costello. Dan Dalton sealed the game with a late penalty kick that put the Garnets ahead for good. They showed heart and physicality by dominating on defense.

The Garnets are currently undefeated in league play after crushing Fordham Prep 59-15 two weeks ago and hold a 3-1 season. Rye is also ranked 43rd in the Country coming into this game, the first time the program has ever broken into the National Top 50.

Next up is a match against nationally ranked Xavier High School out of Manhattan. They play on Saturday, May 14th at 1pm in Nugent Stadium.

What a game for @RyeRugbyNY last night. A hard fought 20-17 win over Pelham. This Fenton-Dalton connection set up Dan Dalton for the game-sealing kick. @RyeAthletics @lohudsports pic.twitter.com/LSaEN9qqUL

MyRye.com is featuring varsity team MVPs from the Spring 2022 sports season. The MVPs have been selected by each coach. A big MyRye.com congratulations...
Read more
Boys Varsity Baseball