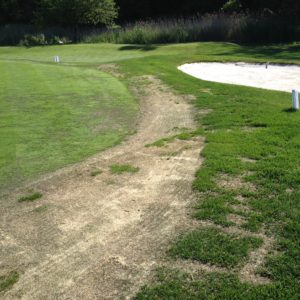 “We have learned that the product [ArmorTech Alt 70] was used according to the label directions as part of the spray programs.”

This is false. A lie, knowingly told or not, printed in a statement released on June 5, 2015 by Tim Zech, the President of United Turf Alliance, one of the largest exclusive distributors of ArmorTech Alt 70, the product that killed 20 greens at RGC in 2015 – and the product that a court of law was able to determine was not applied in accordance with the label or the law.

How do we know as sure as the sky is blue and the sun rises over Oakland Beach in the morning that Mr. Zech’s statement above is untrue and that ALT 70 was applied in violation of EPA label law?

One, because on April 5, 2016, RGC Superintendent Charles D. Lafferty stood in Rye City Court alongside his personal defense attorney, City of Rye Corporation Counsel Kristen Wilson, and plead guilty to misusing ALT 70 on the greens at RGC just prior to their death in 2015.

And two, because Charles D. Lafferty–who has lied in public meetings to Rye residents and RGC members for two years now – admitted “that he applied the Alt 70 on May 1st in a manner not in accordance with the product label,” when questioned by investigating Officer Peter Jackson of the NYS DEC.

So then, how is it possible that Mr. Lafferty can admit guilt and motive in over-applying ALT 70 to investigating officers, plead guilty in a court of law to the misuse of that very same registered pesticide, and yet still, every statement on the record from City of Rye officials and the manufacturer and distributor of ALT 70 says that Mr. Lafferty applied the product ‘according to the label directions’ and that ‘he did everything right’?

Did the City of Rye make factual misrepresentations to AIG in relation to a multi-million dollar insurance claim?

When last we left Rye City Councilman Terry McCartney and Rye Deputy Mayor Julie Killian, both were feigning public umbrage in August 2016 that The Journal News’s July 2016 feature article “Toxic Bomb” pointed at misuse of a registered pesticide by Rye Golf Superintendent Charles Lafferty. Unfortunately for Killian and McCartney (a product liability specialist attorney in his day job) Mr. Lafferty, as mentioned, had already plead guilty in court to doing just that and paid a $500 fine. So why in August of 2016 would they continue to claim Mr. Lafferty did nothing wrong and there was no over-application of a registered chemical at Rye Golf contrary to law and thus opening the door to the possibility of what lawyers call – contributory negligence?

Perhaps AIG Insurance (who paid Rye the $2.55 million in a settlement that Rye City Attorney Vincent Toomey testified contained no evidence of any Rye City employee “contributory negligence”) might be able to outline a reason or motive for this post-guilty-plea storytelling by Rye public officials. The AIG web site features a page on insurance fraud. AIG calls this page Fraud Warning and on the page it presents the following definition, among others:

“Claims Fraud – Includes circumstances where a claimant has fabricated a loss, or has submitted a legitimate loss but intentionally misrepresents the nature or extent of the loss or associated damages.”

Now to pass the CPA examination many years ago I had to successfully complete a 3-hour long test section called “Business Law.” That minor achievement, and 30+ years as a private equity fund manager are all that qualify me to opine on strictly legal matters such as these. So I will not.

What I will do is add more names to those who have documented the law-breaking pesticide applications that Mr. Lafferty has plead guilty to in court and under police questioning. Sorry Mrs. Killian and Mr. McCartney, but you cannot own the truth with lies, no matter how many times they are repeated.

As you might recall from series part’s 1 & 2, the city-hired expert agronomist Steven McDonald of Turfgrass Solutions, LLC, his report to Rye officials dated June 7, 2015 recited each of 4 separate applications of ALT-70, as documented in Mr. Lafferty’s spray charts, on the front page, third paragraph of as follows – “Then ALT 70 was applied on April 22, 1, 8 and 15 May 2015 at 4.6 oz per 1000 sq ft.” And, because of its toxicity, ALT-70 – according to it’s label – cannot be applied, at any rate, more frequently than at 14 day intervals. Applications made any sooner than 14 days apart can earn you a visit from a DEC enforcement officer. The ALT 70 label warns: “It is a violation of Federal law to use this product in a manner inconsistent with its labeling.”

In addition to Steven McDonald, who it should be noted failed to alert the City of Rye to Mr. Lafferty’s illegal rate of applications, the city also retained Dr. Nathaniel A. Mitkowski, Professor of Turf Pathology at the Department of Plant Sciences at The University of Rhode Island. Dr. Mitkowski, who was recommended by Mr. Lafferty’s former boss at Wykagyl Country Club, Mr. Steve Renzetti, visited Rye Golf course on May 21st, 2015 and again on June 1, 2015 to record his observations and review course records and then conduct a series of scientific field trials using samples of chemicals suspected it the deaths of Rye’s greens.

Dr. Mitkowski, who failed to alert the City of Rye to Mr. Lafferty’s illegal rate of applications as well, did corroborate the fact, as did Mr. McDonald, that Mr. Lafferty had made four applications of Alt-70 rather the three he would later claim in official filings with the Westchester County District Attorney and a Court of Law. In his June 2, 2015 report Dr. Mitkowski observed, “the potential contaminant in Alt 70 is concentration dependent and while Woodway (Country Club in Darien CT) only made two applications of the material and is seeing quick recovery, Rye Golf Course made 4 applications of the material and is seeing much more significant damage.”

BOMBSHELL: Scientific field tests reveal NO DAMAGE CAUSED when contaminated batches of ALT 70 were applied at the legal 14-day rate.

Unknown to the public, Dr. Mitkowski’s three-page and final report to the city – dated July 14, 2015 – would contain a bombshell finding derived directly from his proprietary scientific ALT 70 field tests. These findings were in plain sight of our Rye City councilmember’s and other city officials who, as part of their official duties, all received this confidential expert report which has since then been obtained through FOIL requests.

Page two of the report provides the summary results of Dr. Mitkowski’s forensic field tests. The report is attached here for your review.

In the report, Dr. Mitkowski states his purpose: “In order to determine if the Alt70 was contaminated, a greens study was undertaken using the 6112302 material and the 7120607 material” and his protocol, “Applications were made either weekly or biweekly for 28 days, for a total of 4 applications.”

In his findings, which were never made public, Dr Mitkoski observes: “In the trial using the contaminated 6112302 material, small amounts of damage were eventually observed from all treatments utilizing Alt70 at the 1X rate at 7 day intervals.”

That means when contaminated ALT 70 was applied twice as frequently as allowed by law (every 7 days) at legal ounces per sq ft (the so-called 1X rate) then only small amounts of damage were observed.  But if you recall, all 20 greens at RGC were utterly and totally devastated and destroyed. How could it be that doubling the application frequency of contaminated ALT 70 caused so little damage?  The 20 greens at RGC looked like a small nuclear device had fallen on them.

Well, the good doctor tested the contaminated (6112302) material at the legal (1X) application rate and here is what he found:

It doesn’t get much clearer than that folks. Scientific field tests, conducted by a man with impeccable credentials – as Mr. Lafferty attested to himself at RGC Commission meetings –found NO DAMAGE occurred when contaminated ALT 70, was applied at the legal 14-day rate.

So how were the Rye Golf Club greens turned to dust? The best Dr. Mitkowski could do to achieve a “significant amount of damage,” or the type of scorched earth we saw at Rye Golf Club, was to apply the contaminated ALT 70 material at twice the legal frequency (every 7 days) and at twice the rate (2X) of ounces per sq. ft. allowed by law.

Only by doubling the dosage AND the application frequency was Dr. Mitkowski able to recreate a similar amount of damage that Mr. Lafferty had achieved.

Rye City Councilman Terry McCartney, former Rye City Councilman Richard Slack, former Rye Deputy Mayor Laura Brett and current Rye Mayor Joe Sack are all attorneys and Members of the NYS Bar. Rye Labor Attorney & Rye Golf Investigation leader Vincent Toomey is a Member of the NYS Bar. Rye City Corporation Counsel Kristen Wilson – who it was later reveled, worked double duty, as Rye Golf Club superintendant Chip Lafferty’s personal attorney for some period of time – is a Member of the NYS Bar. All of the above and numerous non-attorneys including now Rye Deputy Mayor Julie Killian, Councilman Richard Mecca, and Councilwoman Kristin Bucci were involved in reading these expert reports. But the Members of the NYS Bar, upon taking their Oath of Office, also accept the duty to become Officers of the Courts of New York State.

So throughout the summer and fall of 2015, while regular Rye residents were being told to be patient and to wait and that the destruction of our municipal golf course greens was “under investigation,” – all of these municipal insiders already had these confidential written results of Dr. Mitkowski’s scientific field tests indicating that proper legal application of the contaminated ALT-70 fungicide product produced no observable damage to the grass in scientific field tests.

Let that sink in.

Mr McCartney then went a step further as you may recall from Part 2 of our series. Mr. McCartney – at a Rye Golf Commission hearing on August 12, 2015 – where he was joined by Ms. Wilson, Rye City Manager Marcus Serrano, (and reporter Tom McDermott of The Rye Record) in reminding club members and city residents that “the City is in settlement discussions with TKI’s insurance company AIG, and that “the more we talk about what we did right or wrong” the more damaging it could be it could to a settlement. This theme arose several times throughout the meeting.”