The thrill ride seems to never end. But it may be turning into a haunted house for Westchester County, as Standard Amusements seems to have won the latest carnival game.

In short, a judge is allowing Standard Amusements contract to continue while the bankruptcy and lawsuit play out: 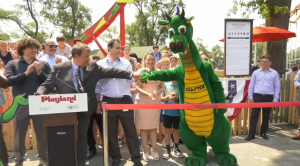 A judge has refused to dismiss Standard Amusements' bankruptcy case, including its lawsuit seeking to block Westchester from ending the company's contract to run Playland amusement park.

U.S. Bankruptcy Judge Robert Drain ruled that the contract would remain in effect while the bankruptcy case continues.

The contract to run Playland was reached in 2016 with then-County Executive Rob Astorino and Standard was scheduled to begin managing the park this November. But when George Latimer took office last year, he railed against the deal, setting in motion what eventually was the county's decision in late April to end the contract.

The following month, Standard filed for bankruptcy and in June filed the lawsuit seeking to enforce the contract."

Read the rest at LoHud.com.