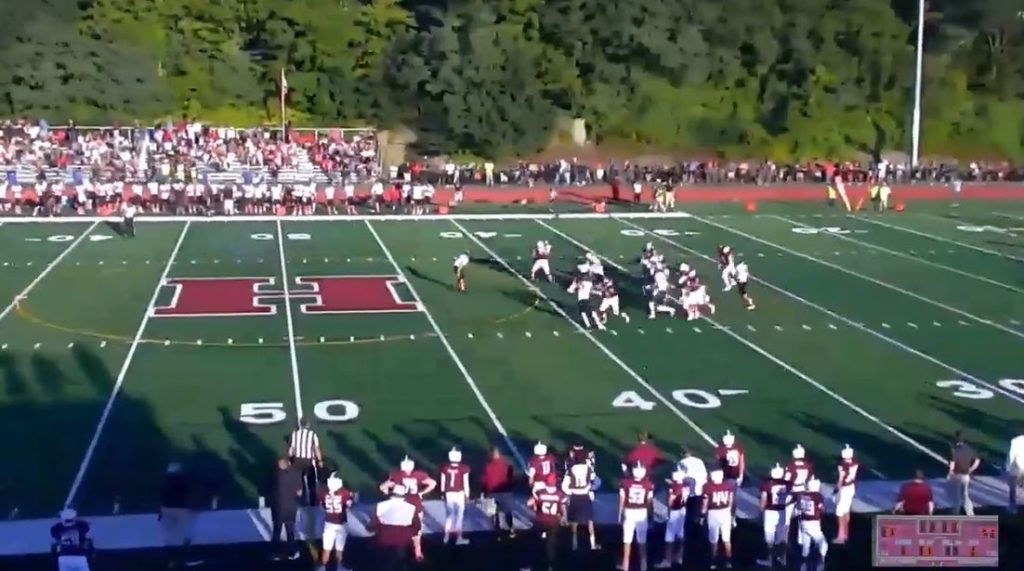 Rye Boys Varsity Football banked Harrison at McGillicuddy Stadium Saturday, taking the win 36-10. The win moved the team to a 5-0 season. The game started off slow for the Garnets but once they got going they did not stop.

“It was a great win. A lot of seniors in particular but everyone stepped up. Two good teams were prepared to play each other,” said Rye Boys Varsity Football Dino Garr. Harrison “came out strong in the first quarter and dominated the line play. Then I think our defense stepped up and came out with some big plays and the offense made some big plays… and they kind of trued the game around. We had a fumble recovery for a touchdown by Charlie Saurack  and the hit was made by Garnet so it was kind of a team effort.”

Asked about playing at McGillicuddy Stadium versus home at Nugent, Garr said it “seems like we are always playing from behind but I guess it comes at the end – the players rose to the challenge. They persevered – it was a great job.”

The live feed of the game was unstable at the time, but you can watch the replay. Football plays again Friday night at home versus Eastchester. “I’d like to get back to Friday night football at Rye. The outlook is we can’t get a let down after the Harrison game.

Offensive highlights, per LoHud included: Caden Whaling for 175 yards and a touchdown on 20 carries; Whaling with two caught passes for 70 yards; Carter Barford with a 32-yard touchdown reception; and Charlie Saurack with a recovered a fumble 68 yard return for a touchdown.

Prior to the start of the game was the presentation of the annual Chris Mello Award. Since 2002, the Mello family has presented scholarships to Rye and Harrison football players in honor of their son, Christopher, who was a victim of the 9-11 attacks.