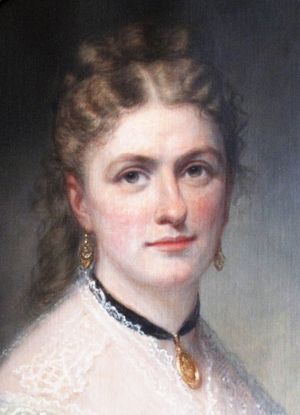 The Jay Heritage Center is proud to announce the receipt of a very important gift from one of John Jay’s descendants, Ada Hastings, of Great Barrington, Massachusetts. Ms. Hastings was one of several Jay descendants instrumental in saving the Jay Property in Rye from development in the 1980s. In celebration of the continued restoration of the 1838 Jay House, she and her family have magnanimously donated a portrait of John Jay’s great granddaughter to be reinstalled in its original setting. The luminescent painting of a young Alice Jay by pre-eminent artist Daniel Huntington appears in late 19th century family photos of the Jay mansion’s Drawing Room; the portrait is shown in a prominent location next to other Jay family portraits by Gilbert Stuart and Asher Durand. 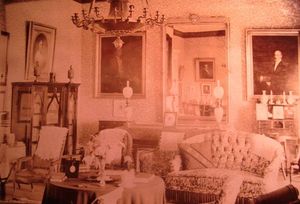 (PHOTO: The Alice Jay painting is visible on far left of room in oval frame.)

Alice Jay and her parents and siblings lived at the Rye estate from 1843 – 1891. Alice ’s father Dr. John Clarkson Jay was a co-founder of New York Yacht Club, a founder of The New York Lyceum of Natural Sciences and amassed the renowned Jay Shell Collection that is owned by the New York Museum of Natural History.

Daniel Huntington (1816 – 1906) won acclaim and prominence as the favored portraitist of New York Society after the Civil War. Though he was equally skilled at genre works and Hudson River style landscapes, he is best known for his likenesses of presidents, statesmen and other distinguished Americans including his painting of Abraham Lincoln that hangs at the Union League Club in Manhattan where the Jays were also members. Huntington ’s training included studying with Jay family friends like John Trumbull, and Samuel F. B. Morse, then president of the National Academy of Design, whose successful career as an artist preceded his renown as an inventor.

Huntington’s leadership roles in the artistic community were many: he was a member of the National Academy of Design for most of his life and served as its president for 22 years (1862 – 1870; 1877 – 1891). He was a founder and president of the Century Association and as vice-president of the Metropolitan Museum of Art for 33 years, he helped that institution expand and grow in stature.

The acquisition of this significant art work along with a rare 1864 needlepoint sampler sewn by Alice Jay when she was 8 years old will help inspire a future series of programs on American painting, portraiture and decorative arts of the 18th and 19th Century at the Jay Heritage Center.

The gift is made all the more special given the anniversary of John Jay’s birthday this month on December 12.  Rye is the site of both John Jay’s childhood home and his final resting place.