According to a campaign news release, Rye's own Julie Killian has been selected by Marc Molinaro, the current Dutchess County executive and presumed gubernatorial nominee, to be his running mate on the Republican ticket this fall. 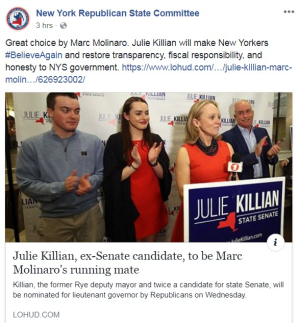 The Molinaro campaign says they looked at more than twenty different candidates before selecting Killian. "Julie Killian is a champion for people who have no voice, who are left behind, who are in crisis and she will never back down from the challenges that are facing our state," said Molinaro. 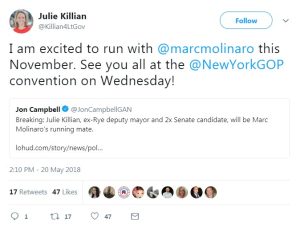 "The easy thing to do would be to shrink from this opportunity and say I have had enough. But single mom's who need to get to work will still have to take a broken subway system, parents with children on opiods will still need to fight insurers for treatment and unemployed community college graduates will still need to find a job. I won't back down against Andrew Cuomo or any opponent of reform, because everyday New Yorkers can't," said Killian. 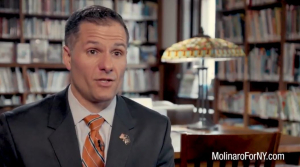 The two will officially be nominated at the Republican convention this Wednesday.

Killian just came off a heavy loss to Shelley Mayer in the special election to fill George Latimer's 37th District State Senate seat. Mayer captured 58% of the vote, even defeating Killian locally within the city of Rye.

From NY State of Politics

Facebook
Twitter
Email
Previous articleRye’s Einhorn is Battered this Year in Market – Bloomberg
Next articleLots of Doody and Duty: Rye City Council Agenda for May 23, 2018