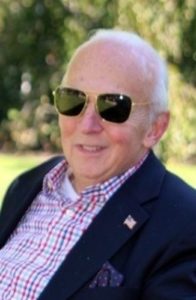 The story of Donald J. Fowley began on April 30th, 1937 on 223th Street and White Plains Road in the Bronx. He was the youngest child of Matilda Leskanic Fowley and William Patrick Fowley with two older sisters: Dorothy and Eileen.

He often spoke fondly of growing up in the Williamsbridge section of the Bronx. Don’s childhood was vibrant, full of playing stickball on the street, excelling in art class, swimming on the swim team and singing in the choir. He was a Momma’s boy, particularly close to his mother, Tillie. He attended PS 103 Elementary School and Evander Childs High School. From the funny inscriptions in his high school yearbook, we know that his contagious happiness was not something he acquired in his old age.

Don went on to study Business Administration at Iona College, class of 1958. During that time, he had a part time job as a short order cook at Horn and Hardart Restaurant in Yonkers. It is there that he met a beautiful Irish waitress named Kathleen Ferriter. Don was relentless; he asked her out for over a year before she finally said yes. Their first date was at Playland Amusement Park in Rye. He picked her up in a turquoise blue 1957 Chevy with a leopard skin dashboard, wearing white suede nubuck shoes and the rest is history. Kathleen later wrote that she wasn’t sure exactly what to make of him, but that she knew that date was the beginning of something special. Kathy became Don’s wife of 37 years with whom he shared three children – Eileen, Kerry and Ryan. The Fowley household was a happy one, full of dogs, antique clocks, good food and even better fun.

Don went on to receive his MBA from NYU’s Stern School of Business in 1961. He served in the US Army Medical Core from 1960-1965. He moved up the ladder at Horn and Hardart from short order cook to the VP of Marketing when he left in 1975. Don catered the Woodstock Music Festival in 1969 and loved to tell people about his experience. He was particularly proud that he had to be escorted off the grounds by the Hell’s Angels when he ran out of food to sell. He became a restauranteur in 1977 when he purchased Nizza in Gramercy Park and later a second restaurant in White Plains. He then went to work for Ogden Allied, where he started the food division and became the VP of Food Services and Pest Control. In the final act of his professional career, Don switched gears and became a “bug man.” His career in commercial pest control sales would last from the mid-nineties until he reluctantly retired a decade ago. He loved to visit customers, especially the ones that had bowls of chocolate in their reception areas. He was proud of his sales prowess and if you were ever in the car with him, he would point out every account he sold as he drove by.

Above all, Don was a family man. He was a wonderful father and proud “Pops” to Christian, Paige, Hope, Liam, Braeden, Tate and Peter. He was extremely close to his grandchildren and their friends. He didn’t miss a single school or sporting event, even if he is infamous for falling asleep at Kindergarten Special Person’s Day. He also had beautiful friendships with his daughter-in-law Deb and his sons-in-law Charlie and Karl. Additionally, he cherished his close relationships with his nieces and nephews.

Don’s first wife Kathy passed away in 1999 after a five-year battle with cancer. He went on to marry Jeanne Ward in 2001. Through that marriage, he gained two stepdaughters, two step sons-in-law and four step grandchildren that he was very fond of. Jeanne took great care of Don as he fought back against cancer, and we are forever grateful for all that she did to keep him comfortable and at home.

In his later years, Don became a registered therapy dog handler. He and his beloved Thunder began visiting the Cos Cob and Old Greenwich, CT Elementary Schools to support students who were struggling to learn how to read. The duo was also a frequent visitor to the Muse and Nathaniel Witherell in Greenwich and did rounds at The Osborn in Rye even before he became a resident. Don and Thunder made a great team and brought a lot of joy to a lot of people. He also joined the choir at St. Mary’s in Greenwich at the age of 68. That choir was serious business, but as always, Don was up for the challenge. He volunteered tirelessly for 29 years for Swim Across America – a cause near and dear to his heart. He also participated in the event each year, swimming a mile in honor of his first wife Kathleen. He swam for the last time just this last July. He was the event’s oldest swimmer, and he took great pride in that.

What set Don apart from most was his genuine love of life. He just loved people. He was a friend to all and an enemy to none. He was always quick with a joke, and you could count on him no matter what. He had his own singular style of dance and was known to serenade anyone who welcomed it – and even those who didn’t. We will miss him singing Happy Birthday to us in German each year, even though none of us speak German and neither did he! He loved chocolate chip cookies, Hershey’s Kisses, chocolate malteds, matching his watches to his outfits, wearing crazy socks, impersonating Donald Duck, and simply making people smile. Don was blessed with many lifelong friends and, an avid collector at heart, he added more each day.

Today, though deeply saddened by our tremendous loss, we are smiling beneath our tears because we are so grateful to have been part of the many who were touched by his light.

To keep everyone safe during these challenging times, the family has decided not to hold a wake. A funeral Mass will be held at the Church of the Resurrection, 910 Boston Post Road, Rye, NY at 10:00am on Thursday, January 20th. For those unable to attend, the Mass can be live streamed on Resurrection’s website.

In lieu of flowers, the family has requested donations be made in Donald’s honor to Swim Across America, PO Box #217, Larchmont, NY 10538. Please add “In memory of Don Fowley” to the memo.