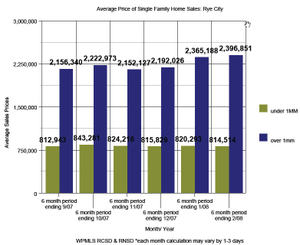 (GRAPH: Click on graph for larger image) While actual homes sales in Rye may have slowed somewhat compared to last year during this time, prices have more than held their own. In the past six months, the average home prices, both under and over $1,000,000, have held steady, and on higher end, increased slightly. It seems that inventory is relatively low, and the market is picking up with prospective buyers.

Since I have been working on MyRye.com, we’ve been tracking some trends in our local real estate market, and one thing that struck me initially was how many sales in our area are consistently over one million dollars. In the past six months, an average of 74.1% of the homes sold in Rye City for over $1,000,000. Granted, there are co-ops and condos well under that range, as well as several homes purchased by singles, young families, and empty nesters, etc. for just over the $1,000,000 mark. But, as most of us already know, in New York State, that $1,000,000+ purchase price entitles you to a "mansion" in the state government’s eyes and subjects you to the dreaded "mansion tax". Somewhat shocking – I could give you several examples of three bedroom ranches and split levels that have sold to builders for over $1,000,000 in recent years as "knockdowns" for larger homes. I guess these homes are mansions as well. Mini-mansions to build mega-mansions! 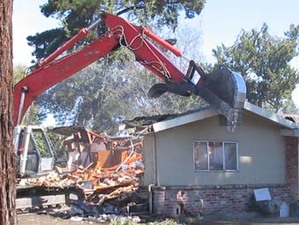 (PHOTO: 1% Please) The New York State mansion tax is a transfer tax that was enacted by then Governor Mario Cuomo in 1989 when the average home price in the state was well under $1,000,000. It existed as a sort of a luxury surcharge for the wealthy, as most homes in New york were priced well under that range at the time. The tax consists of 1% of the purchase price of a one, two and three family home (the tax does not affect the purchase of vacant land or commercial property).

I recently spoke with Assemblyman George Latimer on the subject. He has been working on a bill to revise the threshold to $2,000,000, which would be more in line with the selling prices in our area, and the bill was submitted last week. According to George, he could have justified a higher number based on our home sales, but it is difficult to persuade upstate and outer borough New Yorkers, who don’t necessarily relate to our "normal" real estate prices. "There is a loss in state revenue from this bill (we’re taxing less houses with the bill, which is the purpose of it), but the higher the threshold, the more revenue we lose, the harder it would be for me to get it passed, particularly in a bad fiscal year," according to Latimer. The bill is being sponsored by Senator Vincent Leibell III (Republican – Putnam County).

New Yorkers are not the only ones paying up any longer. New Jersey passed their own version of the Mansion tax on August 1, 2004, requiring home buyers to ante up the same 1% of the $1,000,000+ purchase price. Connecticut has a somewhat similar way to  collect money from residential home sales. The state levies a conveyance tax on the seller at the time of transfer of title. The Connecticut state tax is one half of 1% for the first $800,000; anything that exceeds that is taxed at 1%.

So, we love living here for all the obvious reasons we have spoken about in previous articles. What can we do about the mansion tax? Call or email you legislators above. In my research, I discovered a Revise the Mansion Tax Code petition online (which I promptly signed!). In the meantime, I am going to enjoy living in my 2800 square foot builder’s colonial…mansion!