We thought we'd share a few of the 200 photos in Paul Rheingold's new book Rye. The book shows Rye history via a collection of Rye historical postcards and accompanying anecdotes. 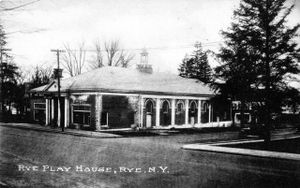 The movies came to Rye in the Play House in 1921, beginning with silent films and then going to Movietone in 1928. The oral histories of old-timers recall going to the Play House as children, paying a dime on Saturdays to see such serials as the Green Archer. The Play House burned down in 1951 and was not rebuilt. Instead the land became a space for the new city hall. Think of this one as the CVS building of 1951 (inside city council joke and no idea if there was a balloon payment involved…).

Rheingold will be delivering a talk about the book and a signing on Wednesday, October 14th at 7:00 pm at the Square House Museum (1 Purchase Street, Rye. Hosted by the Rye Historical Society and Arcade Booksellers) and on Sunday, November 15th from 2:00 – 4:00 pm at the Rye Free Reading Room (Rye Public Library, Community Meeting Room, 1061 Boston Post Road, Rye).