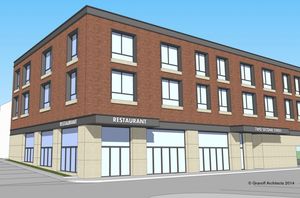 A benign looking building by the Rye train station between the PD HQ and Rye Bar & Grill will become a mixed use facility, under a new plan.

Office tenants at 2 Second Street are vacating so the property can be transformed into 12 apartments and a 3,500 foot restaurant. According to the developers, the building was "originally built as a parking garage for the upper crust of New York Society as a place to store their cars for weekend getaways in the suburbs". 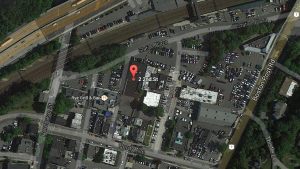 Working with the talents of Granoff Architects of Greenwich, JCS will oversee the construction of the development of the Station Plaza Office Building at 2 Second Street in Rye, NY into a mixed use luxury building.

“We are pleased to have the opportunity to develop a modern, innovative building to foster a greater sense of community and collaboration within the City of Rye,” said Justin Shaw, President, JCS Construction Group, Inc.

Located directly across the street from the Rye Metro-North train station, the structure was originally built as a parking garage for the upper crust of New York Society as a place to store their cars for weekend getaways in the suburbs. It underwent major renovations in 1970 and was transformed into the 12,600 sqft office building it is today.

The newly approved plans call for adaptive reuses of the current industrial/office building to be transformed into a 17,500 sqft mixed use building with 3,500 sqft of restaurant space and 12 luxury apartments with a common roof deck. “The proximity to the train makes this the perfect residence for daily commuters. We are excited to bring a fresh face to this great town and provide residents the option of easy, contemporary living” said Shaw.

Construction is slated to begin in early 2015 and completed in last quarter of 2015.