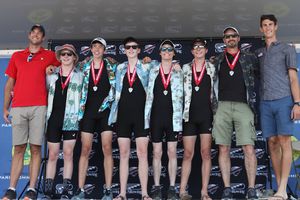 There were high hopes for Rye High’s sole entry in the nation’s top youth rowing event as the team was on a stellar streak in prior regattas, winning the NY State Championships in mid-May and earning Silver at the Scholastic Nationals in Ohio over Memorial Weekend.

The Rye High Lightweight 4+ under Coach Stan Nelson is made up of coxswain Zachary Szabo and rowers John Dailey, Tim Rudolph-Math, Jimmy Cronin, and Jack Hartman. The category is defined by weight, each rower weighing no more than 150 lbs.

Rye fought their way to the elite grand final race over the 2000 meter course besting 16 other boats from both club and high school programs from around the country in qualifying heats and semis. In the grand final, Rye lost out on Gold to NorCal Crew, a California team, by two seconds. The other teams in the grand final were the best from Georgia, Michigan, Wisconsin and Massachusetts.

Winning Silver in the ‘A’ grand final was Coach Nelson’s best result, in a sweep boat category at Youth Nationals, of his nine-year history heading the RHS program.

Dailey and Szabo are RHS juniors while Rudolph-Math, Cronin and Hartman are sophomores. According to Nelson, “if team weight can be managed among other factors, the prospects for another very formidable crew next year are more than real. But for now the guys and me are going to let this accomplishment sink in and just enjoy it!”

Generous financial support from boosters and in particular Julie Killian of Rye and Nancy Neuman of Coldwell Banker made it possible for the entire RHS crew team to travel to the end-of-season regattas.