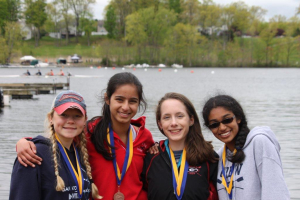 Rye High School Crew had a strong showing, competing in 27 events at the New York State Championships, coming away with seven medals, one championship title, one spot at the USRowing Youth Nationals Championship which will be held in Sarasota, Florida from June 9th-11th, and four spots at Scholastic Rowing Association of America (SRAA), which will be held at Camden, New Jersey May 26th-27th, 2017.

It was a great weekend of competitive rowing for Rye HS, in spite of the mostly inclement weather, though one that really shines above any previous years because of how broad the performances were across the board. Everyone on the team qualified for a Sunday Final and in the Men's Jr Doubles event, all 3 of Rye’s boats made the Finals.

The medal count went as follows:

Gold Medal:
* The Men's Lightweight Four+, (cox) Zach Szabo, and rowers Jack Hartman, Jimmy Cronin, Tim Rudolph-Math and John Dailey earned the gold medal becoming NY State Champions for the second year running and breaking the record for this event by racing the 1500 Meter course at Fish Creek in 4 minutes 55 seconds. This earned them bids to race in both the USRowing Youth National Championship and the SRAA Championship.