Home People Amelia Earhart: From Rye or Harrison? How about Her Vegtables?
People

Amelia Earhart: From Rye or Harrison? How about Her Vegtables? 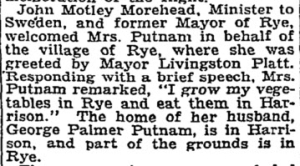 Amelia Earhart has been is the news over the last couple weeks because of a new History Channel documentary about her disappearance.

Earhart was married to George "GP" Putnam, of the publishing fame, and lived in Rye – or so we all thought.

The mystery deepens about this aviation pioneer – not just about her disappearance, but about where she actually lived.. 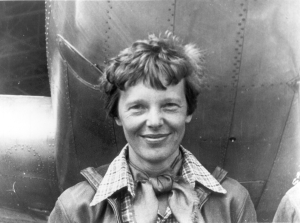 When Earhart returned from her solo flight across the Atlantic ocean in 1932, marking the first time a woman did such a thing, the towns of Harrison and Rye held celebrations upon her return.

The New York Times of June 28, 1932 helps resolve our mystery if Earhart would have been a Garnet or a Huskie:

John Motley Morehead, Minister to Sweden, and former Mayor of Rye, welcomed Mrs. Putman [Earhart was married to George Putnam] in behalf of the village of Rye, where she was greeted by Mayor Livingston Platt. Responding with a brief speech, Mrs. Putnam remarked, "I grow my vegetables in Rye and eat them in Harrison" The home of her husband, George Palmer Putnam, is in Harrison, and part of the grounds is in Rye."