It appears that was not the case, with ads on a couple web sites, including eBay, offering the windows for sale to anyone with the cash. 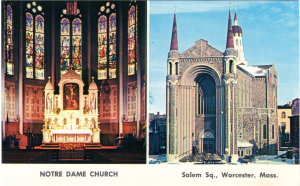 (PHOTO: Stained glass windows from Notre Dame des Canadiens in Wooster, Massachusetts were being sold to the highest bidder, against the wishes of the local diocese, according to a report.)

"WORCESTER – Stained-glass windows from the soon-to-be-demolished Notre Dame des Canadiens Church are being offered for sale on eBay and elsewhere on the internet for upwards of $15,000 or more apiece.

More than half the windows removed from Notre Dame already have been sold, according to the sales agent marketing them for the Roman Catholic Diocese of Worcester.

“We respectfully honor the requests of the buyers to remain anonymous,” Mr. Peirce said.

Until recently, nothing in the online ads stated that only Catholic churches may acquire the windows.

When the Worcester Diocese sold the shuttered landmark church to the developers of CitySquare for $875,000 in 2010, the diocese said stained-glass windows depicting saints and religious figures were to be removed from the church. The diocese stressed that the stained glass only could be transferred to other Catholic churches for religious use, not sold to individuals…

Adrian Hamers Inc. acquired the windows in 2010, according to the Worcester Diocese. The Rev. Richard Reidy, vicar general of the diocese, said the Notre Dame windows had been stored by the company at a Connecticut warehouse and were to be sold to other churches on consignment.

Among the stained-glass windows offered for sale at the Adrian Hamers website this past week were two that Mr. Peirce confirmed were from the sanctuary of Notre Dame des Canadiens.

One of the windows depicts Jesus carrying the Cross. The other depicts Christ taken from the Cross and embraced by his mother, Mary. The windows can be seen in photos taken of the Notre Dame sanctuary before the stained glass was removed after the building’s sale.

The same two windows were listed, with similar advertising copy, at two other places on the web.

One was an eBay store called Creative Urns Inc., maintained by an eBay seller with the handle “liturgy.”

The other was a website, www.classicalchurchgoods.com, maintained by a company called Classical Urns LLC.

On eBay, the windows of Christ with the Cross and Christ taken from the Cross were listed for $15,900 apiece, with free local pickup in Danbury, Connecticut. The listings were posted a year and a half ago, in May 2016, according to eBay. Prior to Nov. 29, nothing in the listings said the windows were for sale only to Catholic churches.

At www.classicalchurchgoods.com, the same windows, “Christ with the Cross” and “Christ Removed from the Cross,” each bore an original list price of $23,900 and a sale price of $15,900, for a savings of $8,000. Nothing in the listings restricted sales exclusively to Catholic churches.

The internet sellers are subsidiaries of Adrian Hamers Inc., according to Adrian Hamers’ co-owner, Mr. Peirce, of Danbury, Connecticut.

Adrian Hamers Inc. shares an address, 2 Madison Ave., in Larchmont, New York, with both Classical Urns LLC and Creative Urns Inc., and also a principal officer. Susan Greer of Rye, New York, co-owner of Adrian Hamers and Mr. Peirce’s sister, is listed as principal of Classical Urns LLC and Creative Urns Inc., according to the New York secretary of state’s office and a corporate profile at Buzzfile.com.

Mr. Peirce said he and his sister are grandchildren of the business’ namesake, the late Adrian Hamers, a noted gold- and silversmith. Their mother, Marthe, is his daughter, and they are the fourth generation of the family to be involved in the business.

For professional reasons, Mr. Peirce said, he goes by the name Whittier Hamers in the course of business. “For work purposes we still use the Hamers name,” he said…

EBay listings carry a log that lists the dates of revisions that have been made to the listing.

A caveat restricting sales to Catholic churches was added to the Notre Dame sanctuary window listings on eBay on Nov. 29, the day after the Telegram & Gazette contacted Mr. Peirce.

Raymond Delisle, chancellor and director of communications for the Worcester Diocese, told the T&G via email:

“Hamers has been updating their web postings regarding the restriction of ‘sold to churches only.’ Evidently your having asked about the Notre Dame window posting (which had been online for some time) reminded him that it did not list that language so it was updated.”

Worth noting, the eBay listings for the Notre Dame windows still feature the “Buy it Now” button, which enables anyone to buy and pay for an item immediately."