Seven thousand copies of the premier issue of Rye magazine hit mailboxes, city hall and high traffic businesses last Friday. And if you turn to page 30, one can read an interview of Rye Mayor Steve Otis conducted by MyRye.com publisher Jay Sears who penned the Town Hall column for the glossy lifestyle book. 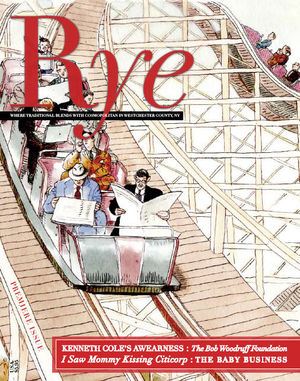 Rye magazine is published by Weston magazine, Inc. that, strangely enough, already publishes a glossy about Weston, Connecticut. The publisher, Eric S. Meadow, grew up in Rye and graduated from Rye High School in 1977. That same year, his mother started Spotlight on Rye magazine, which became Spotlight magazine, which was sold in 2000 and now goes by Westchester magazine (and is also a glossy that appears in your mailbox).

You'll have to find the copy of Rye around your house, but in the Sears interview with Mayor Otis, Otis discusses government transparency, reality television, his two hour and fifteen minute commute (one way to Albany, where his day job is) and his two dogs.

On transparency, the Mayor has some especially relevant comments given the current Shew – Schubert ruckus:

"Question:Often during City Council meeting you and the council mention the “information packets” that are circulated in paper form to each of your homes on Friday evening by the Rye Police Department. While the Open Meetings Law does not require a municipality to provide any back up material electronically, doesn’t it make sense—in the year 2009—to make this material available electronically?

Answer: Most of the key documents are already posted individually on our website. In the last two to three years we increased the posting of significant legislative proposals.  All key financial documents have been posted for many years. Other planning reports or key documents are generally posted. The Council does not yet receive the packet of information we receive each week in an electronic format.  We have discussed this with the City Manager and hope we can in the future. The full packets could then be available on the website to everyone just as the key documents are now.

Question: Would you support making the City Council “information packets” available electronically to outlets such as MyRye.com, The Rye Record and the Rye Soundshore Review, so they in turn can make these materials available to Rye citizens?

For the rest of the interview, ask your spouse, significant other or yourself where they / you put the magazine.