Here is a great Rye blizzard 2010 story from a Greyhound bus driver that got stuck for four hours on I-95 at Exit 19 in Rye in the worst of the snow storm.

The best part is he wound up getting out of his bus and letting other motorists (also stuck) use the restroom on his bus. Now that's a blizzard of class… 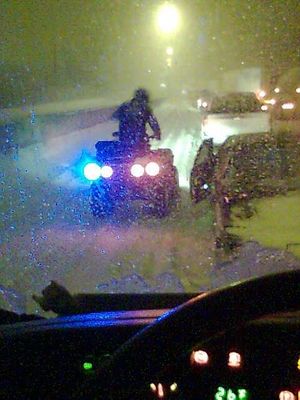 (PHOTO: Rye's i-95 Exit 19 at the height of the December 2010 blizzard. Courtesy Bison and demigodthegame.com)

My day time job is working for a well known transportation company for the last 17 years, 15 of them driving. The company will be apparent in the pictures below. Anyway, this time last week a major storm was barreling down on the east coast specifically New York City…

…After passing through New Haven and Bridgeport, the wind was incredible, snow moving sideways, this was truly the most powerful snow storm I have every drove in.

Roughly near Norwalk, Ct there is a slight rise to 95 south, as I near the New York state line and cars and tractor trailers begin to slip uphill.

…The bus has a feature where the tag axles will raise placing all to weight on the drive tires giving the bus excellent traction in snow, cruising right by everyone else that is slipping.

Cross the State line and was getting about 20 miles from Manhattan and it happen.

A slow crawl and already pass the exit where I could have taken an alternate route to get to New York.

The guy in this Ford Taurus thought he was in a 4×4 and got himself stuck in high snow near the wall, he finally got himself unstuck after I passed him several hundred feet back. Eventually, all traffic came to a stop at 1110pm for the next 6 hours on 95 south near exit 19 near Rye, Ny. Good thing I got that extra fuel before I left. Unfortunately, some people did run out of fuel, one truck actually broke down and I was forced to go around him to continue on. At one point, I got off the bus to stretch my legs and knocked the ice off the wipers and and tail lights they were a few people behind the bus and we got to talking, the young lady that was with them ask was I going to Texas and I said no, "why did you ask that?"

"Because of the plates," she said. I said no, the company is based in Dallas, I'm going to New York. They inquired about do these busses have bathrooms and I said "yes, do you need to use it" and I said, "come on," and a few other motorist used it as well.

Eventually, New York state troopers came by to check on everyone as well as ambulances came down the north bound lane to check as well, then about 5am, state troopers on ATV's were letting people know they are about to open 95 south as seen in this pic…"

The City Council will hold a work session on flooding mitigation activities since Hurricane Ida this Thursday, September 15, 2022, at 6:30pm in City...
Read more
Flooding

In the wake of Hurricane Ida last September, members of the Rye Fire and Police Departments have started to receive training in swift water...
Read more