US Marines to Storm Rye Playland Sunday: Rides and Raids 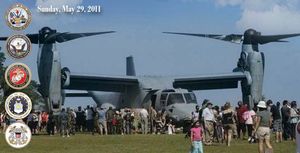 If you want to see something cool, head over to Playland this Sunday, May 29, 2011 between 2pm – 4pm and watch US Marine Corps helicopters storm Rye's waterfront.

As part of this weekends Memorial Day ceremonies, there will be a helicopter search and rescue demonstration by the U.S. Marine Corps at the park. See a video from 2008.

A Marine Corps demo, which includes landing and manning a perimeter while two gunships provide “cover,” will be from 2-4 p.m. (weather and aircraft permitting). A gunnery sergeant will provide a narrative as the helicopters complete their show and then open to the public for tours.  After the demonstration, the helicopters will be available for public display along with the weapons typically used by a Marine Corps rifle platoon. The participating Marines are part of a Special Purpose Marine Air Ground Task Force from 8th Marines, Camp Lejeune, NC.

The Memorial Day ceremony will include an honor guard, firing squad and bugler, and be held at 1:30 p.m. at the Music Tower Theater. The West Point Concert Band will also be participating in the ceremony.

Registration for Veterans and Service Member Appreciation Day will be from 11 a.m. to 5 p.m. and parking pass distribution will be from 11 a.m. to 1 p.m. The Rye park will be open between 12 noon to 11 p.m. Veterans with valid ID cards get one free parking pass, one free admission wrist band and discounts on rides for themselves and their immediate family. OIF/OEF veterans and active duty military personnel get one free parking pass, free admission wrist bands and or free ride wrist bands for themselves and their immediate family. The following proofs will be accepted: military ID, veteran organization membership card, Dept. of VA medical ID card or DD-214/separation papers.