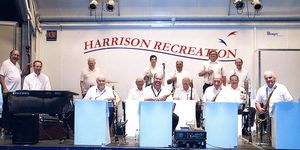 The Reddy Valentino Swing Orchestra will be performing a Concert at Rye Town Park. The concert will be held on Tuesday, July 8th at the park’s south pavilion, located near the Dearborn Avenue entrance to the park. The concert will start at 7:30 p.m. and end at 9:00 p.m. Admission is free, and parking at Rye Town Park will be $5 – $4 for permit holders – after 4:00 p.m. Nearby residents are encouraged to walk.

The Reddy Valentino Swing Orchestra began back in 1938 at New York City’s Hotel Edison. They’ve been entertaining dancers and listeners ever since. Rye’s Scott Wenzel, the group’s lead alto sax player and male singer, has been director since the late 1990’s.

The Reddy Valentino Swing Orchestra has played at top social functions and venues in the New York metropolitan area.

Space in the pavilion will be set aside for dancing, which is highly recommended for people of all ages. All concerts will be held rain or shine, except in case of thunderstorms. Picnicking is welcome. Some seating will be available, but people are encouraged to bring blankets or beach chairs. Dining and takeout is available at the nearby Seaside Johnnie’s Restaurant.

This is the third of seven free concerts that will be held on Tuesdays in July and August. The concert series is sponsored in part by the Friends of Rye Town Park. The Concerts are sponsored in part by Rye Ford/Subaru, ActionEnergy Drinks, and the Pearl Group Restaurants of Rye – Ruby’s, Morgan’s and Rye Grill and Bar.