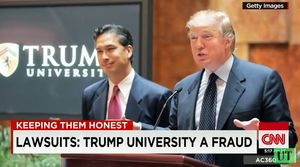 (PHOTO: Rye resident Michael Sexton, one of the masterminds behind the "fake" Trump University.)

Unless you live under a rock, you know the gloves have come off in the Republican primary. In one of the latest attacks, Florida Senator Marco Rubio attacked front runner and real estate executive Donald Trump for running a "fake" Trump University.

The allegations and lawsuits against Donald Trump's Trump University are not new. CNBC reports both New York State and a number of former students are suing the enterprise which reportedly took in $40 million.

What may be new, at least to readers of MyRye.com, is that Rye resident Michael Sexton, has been behind the creation and operation of the alleged "fake" Trump University. Sexton lives in a five bedroom, 3 bath home on Rye Road in Greenhaven that carries an estimated value of $2.4 million according to Zillow. 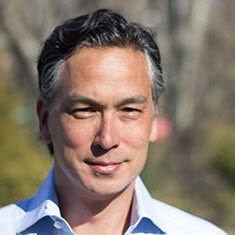 From the NY Times:

"Trump University was founded in 2004 as an online operation, after a Rye, N.Y., businessman, Michael Sexton, approached Mr. Trump with the idea. After an initial investment by Mr. Trump of about $2 million, the business was based in the Trump Building, at 40 Wall Street in Manhattan. According to the attorney general’s office, the day-to-day operations were managed by the Trump Organization and its affiliates.

As early as 2005, the New York State Department of Education warned Trump University that it was operating an unlicensed educational institution in violation of state law, according to the investigation. In 2010, Trump University’s name was changed to the Trump Entrepreneur Initiative.

The marketing plan remained the same, however, beginning with a pitch to attend what was called a free 90-minute seminar to learn how to make money in real estate. In reality, the seminar was a sales pitch to attend a three-day seminar costing $1,495, the investigation found…

Students were told they could go to the next level by signing up for the Elite mentorship and apprenticeship programs for additional costs of up to $35,000…

Seminar participants, she said, were told they would have their photos taken with Mr. Trump.

“It ended up being a cardboard cutout of Mr. Trump,” she wrote." 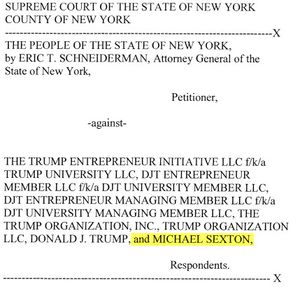 (PHOTO: One of the actions filed against Trump University and Sexton, this one by the New York AG.)

According to his LinkedIn profile, Sexton was president and co-founder of the Trump Entrepreneur Initiative (the name was changed from Trump University after the New York Attorney General went after them). Sexton now runs Grow & co., a consulting firm "with a singular focus: driving revenue growth" that has its headquarters in Port Chester. Further, Grow & co. says "We partner with companies across multiple industries including B2B and B2C and offer specific vertical solutions for the education, wellness and franchise industries." (italics ours).

One of Sexton's colleagues at Grow & co. is the former chief marketing officer of Trump University, Michael I. Bloom, who describes his achievements at Trump University "TRANSFORMED customer acquisition and retention programs, creative assets, marketing team, customer database, and media channel mix, to rapidly increase live event attendance by 54% while reducing acquisition costs 38%. Launched online webinar series and ecommerce sales." Sexton endorses Bloom on LinkedIn, saying "Michael is a results-driven marketer who relentlessly focuses on the ROI of every campaign he runs." 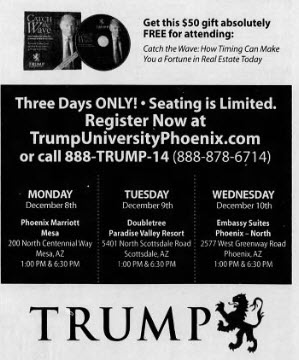 (PHOTO: Part of a Trump University ad that appeared in 2008.)

Here are the charges Rubio leveled at Trump in the recent debate (see the full transcript, or forward about 55 seconds into the video on the same page):

RUBIO: … starting a university, and that was a fake university.

BLITZER: One at a time.

TRUMP: First of all…

BLITZER: One at a time.

RUBIO: And you know what they got? They got to take a picture with a cardboard cutout of Donald Trump…

TRUMP: … I've won most of the lawsuits.

BLITZER: All right, I want to move on.

TRUMP: And they actually did a very good job, but I've won most of the lawsuits.