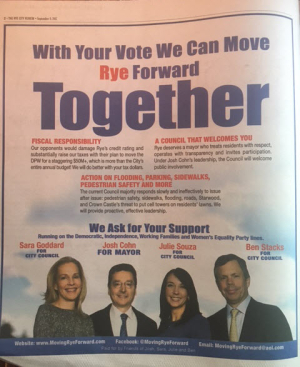 The Westchester County Fair Campaign Practices Committee is saying an ad run by the Rye Democratic slate is "unfair". The group responded to the complaints of Rye Mayor Joe Sack.

"This ruling supports what we have been saying all along. We are very grateful to the committee for taking the time to thoughtfully review these matters," said Sack. "Unfortunately, our opponents have spent lots of time and money disseminating these unfair and misleading ads. At least now the public has an independent basis to judge what they've been up to. Meanwhile, we will continue to take the high road, and run on our good record and promise for continued success."

A single ad was the subject of complaint. Sack also had issue of a "palm card" (a political flyer) and the fairness group did not find an issue in that instance.

Here is the official statement from The Westchester County Fair Campaign Practices Committee:

COMPLAINT 1: Mr. Sack complained that a statement in an ad placed by Moving Rye Forward in the September 8th issue of the Rye City Review is false. The ad claims that "Our opponents would damage Rye's credit rating and substantially raise our taxes with their plan to move the DPW for a staggering $50M+, which is more than the City's annual budget! We will do better with your tax dollars." Mr. Sack claimed that there is no plan to move the Department of Public Works (DPW).
FINDING: UNFAIR
This statement is misleading because a number of options are under discussion and no plan has been approved by the City Council.

COMPLAINT 2: Mr. Sack complained that another statement in the same ad is false. It states that "The current Council majority responds slowly and ineffectively to issue after issue: … and Crown Castle's threat to put cell towers on residents' lawns….“ Mr. Sack maintained that Crown Castle never threatened to put cell towers on residents’ lawns.
FINDING: UNFAIR
This is a misleading statement because whether referred to as cell towers, nodes or antennae, these objects would be attached to existing utility poles that are placed on the right of way, not on the property owned by residents.

The purpose of the Westchester County Fair Campaign Practices Committee is to help set an acceptable standard for political discussion by offering a forum for identifying unfair campaign practices and promoting a climate in which candidates conduct honest and fair campaigns. The Committee encourages candidates to conduct campaigns openly and fairly, to focus on issues and qualifications, to refrain from dishonest and defamatory attacks, and to avoid the use of campaign materials that distort the facts.

The Committee accepts written complaints from candidates about alleged unfair campaign practices. The Committee may then hold hearings to determine whether the action complained about is indeed unfair or whether it falls within acceptable political discourse. Among other things that the Committee will consider to be an unfair campaign practice is a misstatement of a material fact or any communication that misleads the public.

The Committee has no power to compel anyone or any group to stop doing what it has found to be unfair, nor does it have the authority or power to enforce election or other laws.

If the Committee acts on a complaint, it will release its findings to inform the public. The Committee may choose not to consider a complaint; in that case, a hearing is not held and the parties to the complaint are notified.

Statement of Principles of the Committee, as stated in its Manual, is available at www.faircampaignpractices.org. The Westchester County Fair Campaign Practices Committee believes that candidates should conduct their campaigns in accordance with the following principles:

 The Candidate will conduct a campaign for public office openly and fairly, focusing on issues and qualifications.

 The Candidate will not use or condone any campaign material or advertisement that misstates, misrepresents or distorts material fact or any communication that misleads the public. The Candidate will neither engage in nor be involved with false or misleading attacks upon the character of an opponent, nor in invasions of privacy unrelated to fitness for office.

 The Candidate will not participate in nor condone any appeal to prejudice.

 The Candidate will clearly identify by name the funding source of all advertisements and campaign literature published and distributed.

 The Candidate will not abuse the Westchester County Fair Campaign Practices Committee process in order to obtain political advantage. This includes, but is not limited to, announcing that he/she has filed a complaint, or quoting the Committee’s Findings unless the individual Finding cited is quoted in its entirety.

The Candidate will publicly repudiate materials or actions from any individual or group that violates this Statement of Principles.

Facebook
Twitter
Email
Previous articlePlayland Beach: Gone to the Dogs
Next articleDem Head: Sack Did Not Tell The Truth