Home Government Tunnel is Dead, Again (That's Good!). But Question is Why?
Government

Tunnel is Dead, Again (That’s Good!). But Question is Why? 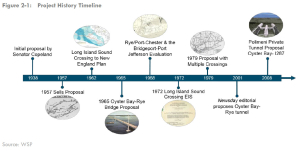 (PHOTO: Past attempts as a Long Island Sound crossing impacting Rye date back to 1938. According to the above recounting in the Governor's own tunnel proposal, this will now be the 10th time an attempt to infringe on Rye has been beaten back.)

The tunnel is dead.

In a passing news story ten days or so ago it was noted the Rye to Osyter Bay tunnel proposal was dead, after it was announced by Governor Cuomo with great fan fare in his state of the state address.

Most interesting is there seems to be no explanation of Cuomo's sudden and un-explained reversal, other than a tunnel (or bridge) across the Long Island Sound being a terrible idea.

Rest not, Rye residents. Past attempts as a Long Island Sound crossing impacting Rye date back to 1938. According to a recounting in the Governor's own tunnel proposal, this will now be the 10th time an attempt to infringe on Rye has been beaten back.

Here is the bit of the defeat of the current proposal. Remember, local officials and the giver should help us explain why it was defeated. This is an important piece of understanding in preparation for the next assault on our city.

Paul Karas, the state's acting transportation commissioner, issued a statement confirming the state Department of Transportation would not move ahead with its plans for the tunnel, which a state-funded study found would have cost up to $55 billion to construct.

Karas did not elaborate on why the administration was abandoning the tunnel plan, which Cuomo himself had repeatedly touted.

"After a careful review of a variety of considerations pertaining to the project, NYSDOT has decided not to move forward with it at this time," Karas said in a statement.

Cuomo resurrected the decades-old idea of linking Long Island to Westchester, Connecticut or the Bronx via a bridge or tunnel across the Long Island Sound in 2016, pledging to fund a feasibility study in his State of the State address that year.

In January, the Department of Transportation released the completed study, which found an 18-mile tunnel from Long Island to Rye or Port Chester in Westchester County is technically feasible but would carry a hefty price tag of anywhere from $31.5 billion to $55.4 billion.

…By Thursday, however, the Cuomo administration reversed course in the face of significant local opposition on Long Island and in Westchester, where local government officials have long expressed concern about the impact on local traffic patterns, particularly on I-287 in Westchester.

He said there was significant concern among residents along the shoreline about the impact, as well as it leading to increased traffic throughout the county.

"I think it is good news," Latimer said. "There was not much support for it in Westchester County.""