Playland’s 2019 Opening Day is going in the record books as having the highest attendance the park has seen on opening day in 7 years. The Park welcomed 8,228 people on opening day last weekend, with attendees enjoying the rides, food, musical entertainment and Kiddie Land shows. 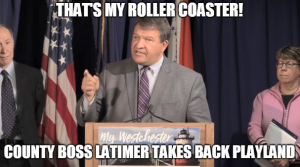 The record attendance comes as Latimer and the County are in a nasty fight with Standard Amusements over the Playland contract cancellation.

Westchester County Executive and Rye resident George Latimer said: “This attendance record shows just how important refreshed marketing, creativity and drive are when promoting an amusement park. The workers at Playland did a fantastic job readying the park – it was spotless and colorful and adorned with our new mascot Coaster. I thank them for their tireless work. Hearing the roar of the Dragon Coaster coupled with laughter under the warm sunshine was the perfect Saturday at Playland Park. I am excited to see attendance continue to climb as we roll out more of our promotional events at Playland this season.”

Playland has been Westchester County and the New York Metropolitan areas’ great family amusement park and entertainment center since 1928. For the 2019 season, the Park is welcoming many new, exciting events and promotions – including a collaboration with ArtsWestchester and the Westchester Parks Foundation for a public art display, the first new commercial in 10 years, the welcoming of “Town Days” to promote community and 11 new musical acts.

Latimer continued: “This administration is committed to Playland. We plan to run this park with a level of energy and vitality that has been missing. This is a County park for County people – and whether you live in the far northwest corner of this County in Cortlandt, Peekskill or Buchanan, or down in the southeast portion near Pelham Manor and New Rochelle, or if you are in Yonkers in the southwest corner, or North Salem in the northeast section of the County – Playland is a park for you.”

If you don't know, Rye resident Latimer lives just steps from Playland. The county boss can hear the roar of the Dragon Coaster — all season long.