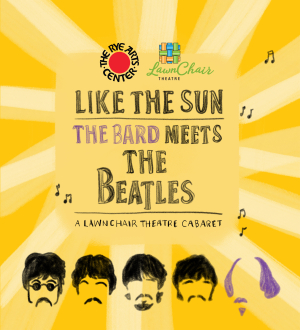 LawnChair Theatre’s 3rd annual Cabaret, Like the Sun: The Bard Meets the Beatles, will celebrate two of the greatest British exports: The Beatles and William Shakespeare. The show will be at The Rye Arts Center on Thursday, January 30th at 8 PM and Friday, January 31st at 8 PM.

LawnChair Theatre has assembled a stellar cast of singers who will perform a selection of The Fab Four’s favorite songs, along with popular sonnets and soliloquies by the Bard of Avon.

The Cabaret returns after two successful seasons featuring the music of Joni Mitchell (2019) and both Leonard Cohen and Randy Newman (2018). In past years, readings of correspondences or other writings by the featured songwriters were interspersed between the songs. This year LawnChair Theatre will use sonnets and soliloquies as interlude material, fitting for an organization that has presented Shakespeare’s plays in Westchester for more than a decade.

The artistic works of both The Beatles and Shakespeare are timeless, and their cultural influence is profound. Presenting the works of these two cultural icons, side-by-side will give the audience a unique experience. “What do Shakespeare and The Beatles have to say to one another? What common gifts can they share with us?” asks Peter Green, Artistic Director of LawnChair Theatre.

The Rye Arts Center’s Performing Arts Room will be transformed into an intimate cabaret setting, complete with a cash bar.

The cast for Like The Sun is: Betzabeth Castro, Peter Green, Claire Kenny, Rachel Schulte, Lisa Spielman, Julie Thaxter-Gourlay, and Hilary Webster. Musical Direction by Keith Levenson, the symphonic conductor of The Who’s current international tour. He will be joined by Associate Musical Director, Ben McCormack, a Connecticut-based singer, pianist, composer, and arranger.