Rye City will be reviewing a comprehensive city-wide property revaluation process at the city council meeting tonight. Revaluations are complicated and politically unpopular as they result in higher property taxes.

A presentation will be made to the council by by Government Policy and Research Committee – members are Susan Jansen, Pat McGunagle, Lizza Reyes-Clark and Matthew Thomas. Property taxes represent 53% of the City budget and about 90% of Rye City Schools budget.

Rye conducted its last assessment in 1972. 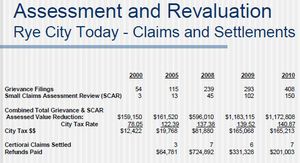 Grievance filings on assessments have steadily risen in recent years from: