The 2018 Rye Memorial Day keynote speaker was Rye resident and Iraq and Afghanistan veteran, Ken Rathje. MyRye.com is printing a copy of his remarks just below. 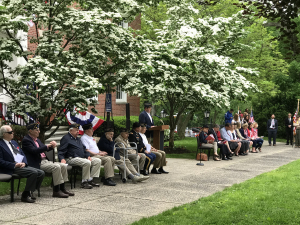 (PHOTO: The Memorial Day service 2018 on the Rye Village Green.) 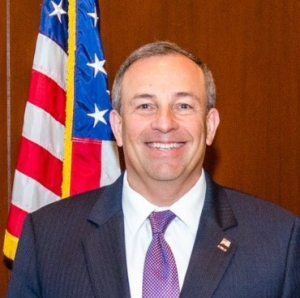 Good morning, I am Army Colonel Ken Rathje, and I am honored to be here today. Thanks for having me. And a special thanks to the color guard, the boy scouts, of which my son Michael is a part of.

This day honors all those who died serving the United States Military. I know Rye has a strong history of serving our country and we are gathered here today to honor those names on the plaque of those who served and died. So let’s have a moment of silence to honor their memory and the ultimate sacrifice they made. 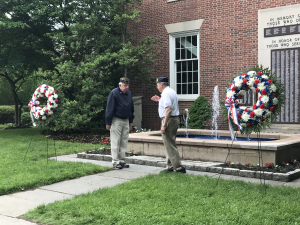 I know this day to be a day of reflection and healing after a war, and but yet our Global War on Terrorism rages on in places all over the world. Since Viet Nam, we have had

But I remember meeting a WWII vet at a West Point Founder’s Day dinner. I noticed he was wearing a Bronze Star and so was I. He asked where I got mine and I said Baghdad, August 2007. So I asked him where he got his and he said Battle of the Buldge, December 1944. So I bought him a beer and he asked if I was on the front lines.

And I get asked that often.

But we are in a asymmetrical warfare. There are no front lines. Only staying within the wire of a Forward Operating Base or going out into hostile area, which I did almost daily in Iraq.

So I told him, I was on the front lines almost daily for a year. And then he bought me a beer.

You see, that’s the great equalizer, when you are on the front lines, or in hostile areas, as rough men and women, ready to visit violence on those who would harm us, so loved ones can sleep at night, you rely on your battle buddy and God. Always in a hypervigilance state to do your part, which at the basic instinct is being ready to kill.

And sometimes, no matter how hard we try, sometimes our buddies, or sons and daughters don’t make it. 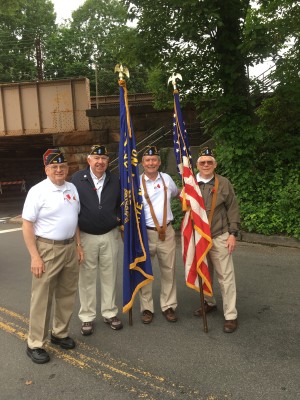 So I wear my uniform today to honor them. And some day, I hope there is a plaque to honor the men and women from Rye who served in combat since Vietnam. I’ll be publishing a book on my experiences later this year, and I will donate money towards this.

But, today, I’d like to tell you a few stories, one from Iraq and one from Afghanistan.

I went to Iraq at 45 years old after 24 years of training. I was sent there to rebuild the Economy, which isn’t as hard in a Centralist Economy. And very similar to what I do for FEMA now as a civilian.

1st day in Baghdad our building was hit with Iranian made 122mm Katusha Rockets. Luckily, no one was hurt.

A week later, we arrived in Ramadi and went to a memorial service for 5 soldiers who died that week.

Several months later, I was back in Baghdad in the Green or safe zone, and we were hit by those Rockets again.

Anyway, I hear 2 rounds hit, and got up to see if everyone was ok. I saw a US Government civilian hurt and helped the reaction force guys patch him up and take him away. Then my buddy came out to see if I was ok and I said I was, why, there were only two and he said, Ken, there were 9. I didn’t even hear or feel the other 7 hit.

I thought to myself, this is a heck of a way to rebuild an economy.

The lesson I learned there was to thank God for letting me be in the land of the living, and to keep moving even when rounds are landing all around, and may not even be visible.

Now fast forward, 5 years later, and after a few years at the Pentagon, I was working with DIA and I had to go to replace a LTC in Kandahar, Afghanistan who was shell shocked and not very affective.

I had to replace him with another LTC, who arrived 2 days before me, and he had never been in combat before and was already shell shocked.

As I arrived, I tried to conduct a transition meeting and these two LTCs were just not communicating.

Well since I had now become learned at the Pentagon, I planned ahead and brought cigars.

So we took a break and went to a gazeebo outside to smoke.

As luck would have it, it started to rain, not uncommon in that part of Afg in January, but it started to thunder and lightning out, which was uncommon.

Well since we were next to the external wall of the Base, we thought we had better lock a magazine in our weapons and load a round in the chamber in case the enemy attacked.

And it really poured hard, and we smoked those cigars and then lit up another one and smoked that too.

And because of our heightened senses and potential fire fight, we had the best transition brief I had ever seen.

Well the enemy never attacked and the following day, the sun came out and I flew home. As I was sitting on the plane I thought what did I learn?

3 things: 1) When in a leadership position, lead 2) there is never a bad time to light up 3) the sun does really come out after a storm.

And that’s what I’d like to leave you all with today.
You may have lost someone at war, or in life, but the sun does come up again, and life goes on, and those especially who have died for our freedoms, gave us the right to go on living. So smoke a cigar if your old enough or hug a loved one when you can. I think we owe it them.

Thanks again for having me today! And God bless.